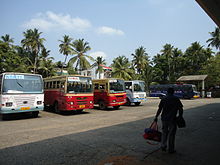 Kerala has 145,704 kilometres (90,536 mi) of roads; it accounts for 4.2% of India’s total. This translates to about 4.62 kilometres (2.87 mi) of road per thousand population, compared to an average of 2.59 kilometres (1.61 mi) in the country. Roads in Kerala include 1,524 km of national highway; it is 2.6% of the nation’s total, 4341.6 km of state highway and 18900 km of district roads.[235] Most of Kerala’s west coast is accessible through two national highways: NH 47 and NH 17, and the eastern side is accessible through various state highways.[236] There is also a hill highway proposed, to make easy access to eastern hills.[237] National Highway 17 with the longest stretch of 421 km connects Edapally to Panvel; it starts from Kochi and passes through Kozhikode, Kannur, Kanhangad, Kasaragod and Uppala before entering Karnataka.[236] District Palakkadis generally referred to as the Gateway of Kerala due to the presence of the Palakkad Gap, in the Western Ghats, which connects the Northern (Malabar) and Southern (Travancore) parts of Kerala to rest of India via road and rail. It has the state’s largest check post Walayar through which all the major public and commercial transportation happens, to reach all other districts of Kerala.[238]

The Department of Public Works is responsible for maintaining and expanding the state highways system and major district roads.[239] The Kerala State Transport Project (KSTP), which includes the GIS-based Road Information and Management Project (RIMS), is responsible for maintaining and expanding the state highways in Kerala; it also oversees a few major district roads.[240][241] Traffic in Kerala has been growing at a rate of 10–11% every year, resulting in high traffic and pressure on the roads. Road density is nearly four times the national average, reflecting the state’s high population density. Kerala’s annual total of road accidents is among the nation’s highest. The accidents are mainly the result of the narrow roads and irresponsible driving.[242] National Highways in Kerala are among the narrowest in the country and will remain so for the foreseeable future, as the state government has received an exemption that allows narrow national highways. In Kerala, highways are 45 meters wide. In other states National Highways are grade separated highways 60 meters wide with a minimum of four lanes, as well as 6 or 8 lane access-controlled expressways.[243][244] NHAI has threatened the kerala state government that it will give high priority to other states in highway development as political commitment to the better highways has been lacking from the government,[245] although State had the highest road accident rate in the country, with most fatal accidents taking place along the State’s NHs.[246]

The Indian Railways‘ Southern Railway line runs through the state connecting most of the major towns and cities except those in the highland districts of Idukki andWayanad.[247] The railway network in the state is controlled by two out of six divisions of Southern Railway; Thiruvananthapuram Railway division and Palakkad Railway Division.[248] Thiruvananthapuram Central (TVC) is the busiest railway station in the state. Kerala’s major railway stations are Thiruvananthapuram Central (TVC), Ernakulam Junction (South) (ERS), Kozhikode (CLT), Shornur Junction (SRR), Palakkad Junction (PGT), Kollam Junction (QLN), Kannur (CAN), Thrissur Railway Station (TCR),Ernakulam Town (North)(ERN) Alappuzha (ALLP), Kottayam (KTYM) Kayamkulam Junction (KYJ) and Chengannur (CNGR). Major railway transport between Beypore–Tirurbegan on 12 March 1861, from Shoranur–Cochin Harbour section in 1902, from Shenkottai–Punalur on 26 November 1904, from Nilambur–Shoranur in 1927, fromPunalur–Thiruvananthapuramon 4 November 1931, from Ernakulam–Kottayam in 1956, from Kottayam–Kollam in 1958, from Thiruvananthapuram–Kanyakumari in 1979 and from Thrissur-Guruvayur Section in 1994.[249]

Kerala has numerous backwaters, which are used for commercial inland navigation. Transport services are mainly provided by country craft and passenger vessels.[205] There are 67 navigable rivers in the state while the total length of inland waterways is 1,687 kilometres (1,048 mi).[255] The main constraints to the expansion of inland navigation are lack of depth in waterways caused by silting, lack of maintenance of navigation systems and bank protection, accelerated growth of the water hyacinth, lack of modern inland craft terminals, and lack of a cargo handling system.[205] A 205 kilometres (127 mi) long canal, National Waterway 3, runs between Kottapuram and Kollam.[256]

Main article: Economy of Kerala
Main article: Tourism in Kerala
Sign into your account
or
Login with Facebook
Login with Google
Create an account
Reset Password
Register here! Forgot Password? Back to Login Return to Login
Need Help? Chat with us
Start a Conversation
Hi! Click one of our member below to chat on Whatsapp
The team typically replies in a few minutes.
Kerala Model Home Plans
KMHP Support