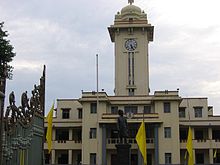 The Kerala school of astronomy and mathematics flourished between the 14th and 16th centuries. In attempting to solve astronomical problems, the Kerala school independently created a number of important mathematics concepts including results—series expansion for trigonometric functions.[344][345] Following the instructions of theWood’s despatch of 1854, both the princely states, Travancore and Cochin, launched mass education drives with the support from different agencies mainly based on castes and communities and introduced a system of grant-in-aid to attract more private initiatives.[346] The efforts by leaders, Vaikunda Swami, Narayana Guru and Ayyankali, towards the socially discriminated castes in the state, with the help of community-based organisations like Nair Service Society, SNDP, Muslim Mahajana Sabha, Yoga Kshema Sabha (of Nambudiris) and different congregations of Christian churches, led to development in the mass education of Kerala.[346]

In 1991, Kerala became the first state in India to be recognised as a completely literate state, though the effective literacy rate at that time was only 90%. As of 2007, the net enrollment in elementary education was almost 100 per cent and was almost balanced among different sexes, social groups and regions, unlike other states of India.[347] The state topped the Education Development Index (EDI) among 21 major states in India in the year 2006–2007.[348] According to the first Economic Census, conducted in 1977, 99.7% of the villages in Kerala had a primary school within 2 km, 98.6% had a middle school within 2 km and 96.7% had a high school or higher secondary school within 5 km.[349] According to the 2011 census, Kerala has 93.91 percent literacy with the national literacy rate being 74.04 percent.[322]

The educational system prevailing in the state schooling is for 10 years, which are streamlined into lower primary, upper primary and secondary school stages with a 4+3+3pattern.[347] After 10 years of secondary schooling, students typically enroll in Higher Secondary Schooling in one of the three major streams—liberal arts, commerce or science.[350] Upon completing the required coursework, students can enroll in general or professional under-graduate (UG) programmes. The majority of the public schools are affiliated with the Kerala State Education Board. Other familiar educational boards are the Indian Certificate of Secondary Education (ICSE), the Central Board for Secondary Education (CBSE), and the National Institute of Open Schooling (NIOS). English is the language of instruction in most self-financing schools, while government and government-aided schools offer English or Malayalam.[350] Though the education cost is generally considered low in Kerala,[351] according to the 61st round of the National Sample Survey (2004–2005), per capita spending on education by the rural households in Kerala was reported to be ₹ 41 for Kerala, more than twice the national average. The survey also revealed that the rural-urban difference in the household expenditure on education was much less in Kerala than in the rest of India.[352]

Main article: Media in Kerala
Further information: Kerala Model Home Plan
Sign into your account
or
Login with Facebook
Login with Google
Create an account
Reset Password
Register here! Forgot Password? Back to Login Return to Login
Need Help? Chat with us
Start a Conversation
Hi! Click one of our member below to chat on Whatsapp
The team typically replies in a few minutes.
Kerala Model Home Plans
KMHP Support