How Builders Make New Homes More Spacious, Inside and Out 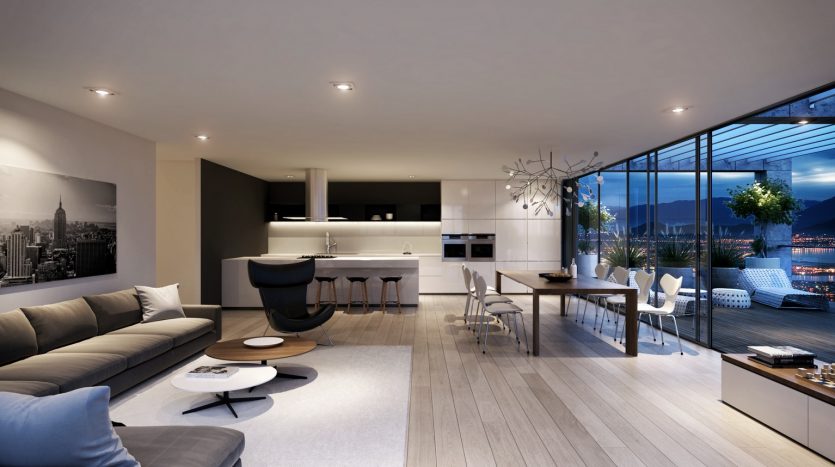 That’s becausetoday’s homesare larger, on average, than homes built in yesteryears and builders’ newer floor plans and architectural designs create both the reality and illusion of more space.

Spaciousness isn’t all about square footage, however.

Perhaps the best way to make a house feel much larger is to raise the ceilings to 9, 10 or even 12 or 15 feet, says Trey Bitteker, general sales manager at Pulte Homes in Arizona. “High ceiling heights will certainly open up a house. When someone walks through it, every room feels a little bit larger,” he says.

New homes today commonly have double-height or one-and-a half height ceilings in one or more rooms such as an entry hall, family room or formal living room, says Michael Malone, principal at Michael Malone Architects in Dallas. “No matter how small a room is,” Malone says, “that extra vertical height makes a lot of difference.”

Higher ceilings can be paired with a two-story home and grand staircase that add a feeling of even more space.

“Buyers want a three-car garage,” Hauge says. “They want four bedrooms. They want a good-sized kitchen, family and dining areas. They want a game room and media room. To get all that, you almost have to go to a two-story.”

But not always. Builders also offer larger single-story homes, though they typically cost more since a larger lot (i.e., more land) is necessary to accommodate plenty of space on one level.

Interior spaces such as a family room, kitchen and dining area that flow into one another without the interruption of walls can make a new home feel bigger, too. “One big, open space does lend itself to making the home feel a lot larger,” Hauge says.

Using the same materials for walls, ceilings and floors inside and outside makes the space feel bigger and inspires homeowners to develop more secondary space outside as well, Koss says.

Or as Malone puts it: “That connection of the interior space with the exterior is a big part of the effect of making a small footprint feel bigger and a big footprint feel luxurious.”

Instead of such rarely used rooms as a traditional formal dining or living room, and hallways, which are typically dark and narrow, builders today add bonus rooms that make a home’s space more useful for the homeowners.

Examples Bitteker cites include an “owner’s retreat” off the main bedroom that could be a sitting area, workout facility, office space or TV room; a “planning center” off the kitchen that could be used to drop keys and other belongings, pay bills and organize family meals and an “everyday entry” off the garage with space for shoes, coats, backpacks, hats and the like.

Read more on how changing room names reflect the way we live.

Flexible, or “flex,” rooms create space by giving buyers options to use one room in multiple ways.

Koss says these spaces, which he calls “double-duty rooms,” can combine a home office with a guest bedroom, a TV room with a kids’ playroom or a laundry room with a crafts room. Properly outfitted, one room could even function as a workspace, playroom and overflow sleeping area, he suggests.

Properly placed, windows also create spaciousness, again because they extend the indoors to the outdoors and add light to a room.

“We strategically place windows for optimal views so you can look out and see that pool or beautiful landscaping you put in your backyard,” Bitteker says. “The windows are larger than some you may have seen in the past, which will also make the rooms feel bigger.”

Bitteker also points to the three-panel sliding glass door as a step toward greater spaciousness. This door doubles the opening’s size and allows people to move freely out to a patio.

“Years ago, (the thinking was) put in as many windows as you want and add on as many air-conditioners as you need to make it work,” he says. “Today, we have better glass and builders and architects are paying more attention to how tomaximize where each window goes so it adds light, but not a lot of heat. It’s about being sensitive to placement.”

Once the house is completed, lighter paint colors and finishes are used today to reflect light and further enhance the effect of large, open and spacious rooms, Malone explains.

“You can never put enough light on a dark finish to make a room feel bright,” he says. “You can put a very small amount of light on a white finish or blond wood and it makes the whole space seem much bigger and brighter.”

Marcie Geffner is an award-winning freelance reporter, book editor and blogger whose work has been published by a long list of financial, mortgage and banking websites, trade magazines and newspapers. You can find her on Google+.
That will bring the dream of build your spacious homes.
To build your spacious homes contact us designer homes
Want to see more designs? You are here

Who on Your Building Team
Do you need an architect or designer?
Sign into your account
or
Login with Facebook
Login with Google
Create an account
Reset Password
Register here! Forgot Password? Back to Login Return to Login
Need Help? Chat with us
Start a Conversation
Hi! Click one of our member below to chat on Whatsapp
The team typically replies in a few minutes.
Kerala Model Home Plans
KMHP Support