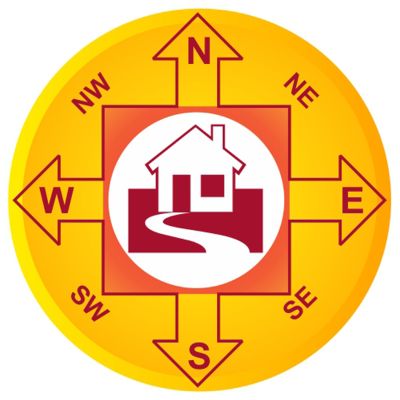 Atharvaveda (Atharvana Veda) is the fourth Veda (Knowledge) in the ancient sanskrit literature in India.

Atharva Veda and its Upanishads were mainly composed by two groups of rishis known as the Atharvanas and the Angirasa, hence its oldest name is Ātharvāṅgirasa.
Later many seers contributed towards it.

Vaastu Sastra (architecture, building technology, rules of planning a layout etc) is part of this Veda.
8 main directions and 1(center) are rules by 9 gods and planets (Similar to directions of Navagrahas or 9 planets placed in a temple)

How to test Soil before buying a land/plot

Dig a cube shaped pit (same as above) and fill it with water and observe after 15 minutes.
If water level in pit remains same, then its a good quality land.
If only 10-20% water is absorbed and remaining is visible in pit, then it can be considered okay to buy.
If more water is absorbed by the land, then reject it.

Elevation and Slopes based selection of Plot

Never buy a land/house from someone who is :
1. Bankrupt
2. Suffering from lunatic diseases, leprosy, psychological problems, insomnia etc
3. Leaving the country

Good and Bad shapes of Land

One can observe that triangle shaped cities, states and countries do not prosper materialistically and are always caught up with issues like revolutions, anger against government, anti-government establishments trying to take control, lack of adequate rainfall, food scarcity, unemployment etc.

While digging the land for foundation, if these items are found :

Rooms in 8 directions and Usage

Vaasthu guidelines for kitchen construction
വീട്ടിൽ ഐശ്വര്യം കൊണ്ടുവരാൻ ചില വാസ്തു വിദ്യകൾ
Sign into your account
or
Login with Facebook
Login with Google
Create an account
Reset Password
Register here! Forgot Password? Back to Login Return to Login
Need Help? Chat with us
Start a Conversation
Hi! Click one of our member below to chat on Whatsapp
The team typically replies in a few minutes.
Kerala Model Home Plans
KMHP Support